Orion Health is a New Zealand company, and works closely with healthcare organisations in its home country. One of its oldest and biggest customers is Southern Cross Healthcare, which is New Zealand’s largest private healthcare provider.

Carey Campbell, director of nursing, explained that Southern Cross Healthcare works with partners and has ten wholly owned hospitals across the country. Cheekily, she told the UK and Ireland Customer Conference 2022 in Bristol that its newest facility is in a beautiful site, looking over a mountain: “and a great place to work if any of you are looking for a new venture.”

Ten years ago, however, it had no electronic medical record. It had a patient administration system that linked to a national database of allergies and alerts. Luckily, Carey said, there were some visionary IT people, who not only had a vision for an electronic patient record, but picked Orion Health to do it.

Carey said they also recognised that implementing an EPR is a business change process – one that changes the way that healthcare is done. Now, 16 hospitals use the system, Clinical Workstation, every day; not just for administration, but for critical clinical functions, such as taking observations and calculating early warning scores. There are whiteboards for managing wards and theatres, and for often overlooked but essential functions, such as ordering food. There are timelines that give clinicians access to critical information, such as the medications that a patient is taking.

Carey said the first factors in this success had been that decision to treat implementation as a business change process. The second was to “keep the patient at the centre” of thinking. For example, she said, the EPR has one pre-admission process, instead of different processes for different treatments, which saves time, and makes it easier to populate discharge letters. Throughout, she said, the EPR team and Orion Health had focused on “doing” and not just on viewing information.

Technically, she said it had been important to pick a flexible system that could be configured to work the way that clinicians work. Without that, she said, there was always a danger of ‘nursearounds’ – or ‘tech hacks’ – or staff taking shortcuts through the system. Implementation followed a period of close working with each site, and training was role-specific. Go-lives were supported by staff from sites that had already been through the process.

More recently, she told her UK audience that moving to mobile working had been hugely important. “This has enabled our nurses to pick up a phone at the start of their shift and take the record with them,” she said. “We started with e-vitals, and on the very first shift that it was used, we had a nurse saying: ‘it would be great to add a progress note’. So, we have not had to force new functionality on the nurses, they were all for it.” Doctors, she added, have also embraced mobile working. In fact, she said, some consultants and anaesthetists had refused to use the EPR until they could use it on their phone.

Looking forward, Carey echoed the previous conference presentation from Connecting Care: “There is always more to do.” A current focus is using Orion Health’s smart search, to make it easier for clinicians to find structured and unstructured information in the record, on implementing fluid balance charts and e-admissions, and on opening up access to patients.

Top tips: and a little Kiwi 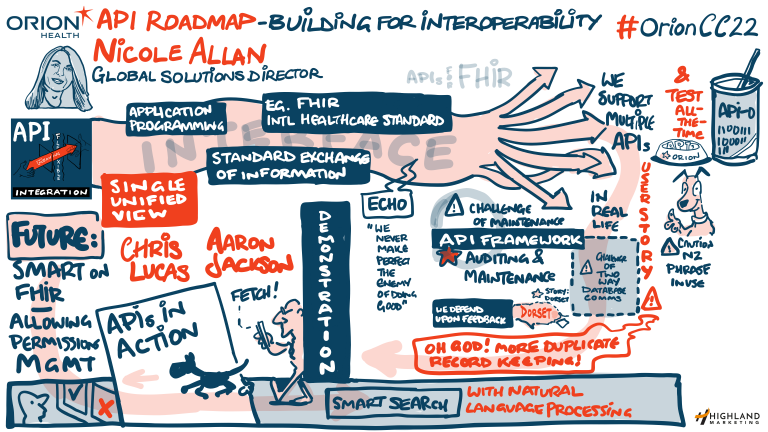 Keep up to date with healthcare technology

Join us for a live webinar on January 24 to learn how healthcare systems can leverage a digital front door and hear real-life examples and digital transformation best practices.

How does HL7 impact your visits to healthcare services?
We've explored how through John's story in this latest blog.

As 2022 draws to a close, we wanted to revisit our top 5 blogs as chosen by you! Check out what they were here - https://bit.ly/3VdP7dH